George Smith: Horticulture Apprentice | Central YMCA Skip to main content
Profile
The grass can sometimes be greener on the other side

Despite achieving great GCSEs – mostly As and Bs – 18-year-old George decided A Levels were not for him. Instead, he chose a different path, becoming a horticulture apprentice. Now, he’s working with Melville Brown Ltd (a commercial landscaping business based in Gloucestershire) and training with YMCA for his Horticultural Operative Level 2 apprenticeship qualification.

Like all apprentices, George receives on-the-job training from an experienced member of staff inside the business. In George’s case, his professional mentor is Richard Mountjoy. Richard is the company’s Operational Manager and has 26 years of work experience and landscaping expertise to share.

He works Monday to Friday from 8am to 4pm and does his coursework during the evening or weekends. At the end of the apprenticeship, he’ll take three exams.

The apprenticeship doesn’t cost George anything and he’ll soon be earning £230 per week. When he qualifies, George could go on to earn £35K as a Landscaper with some managerial responsibility.

Do something you love

When you build your career based on your interests and hobbies, you know that you’re on the right track.

George is the first Horticulturalist in his family and has always loved nature and being outside. As a little boy, he enjoyed going fishing and bird watching with his dad.

He did very well in his GCSEs - mostly As and Bs, but decided half way through his A Levels that further academic study and going away to university just simply wasn’t for him:

“My memory of school was pretty good. I quite enjoyed it, but after my first year of A Levels, I knew it wasn’t for me – not so much the subjects, but more the style of study. I haven’t ruled out university, but I know I won’t enjoy it. I’m quite a solitary person who would find it hard living with flatmates.”

Hear more from George, in his own words: 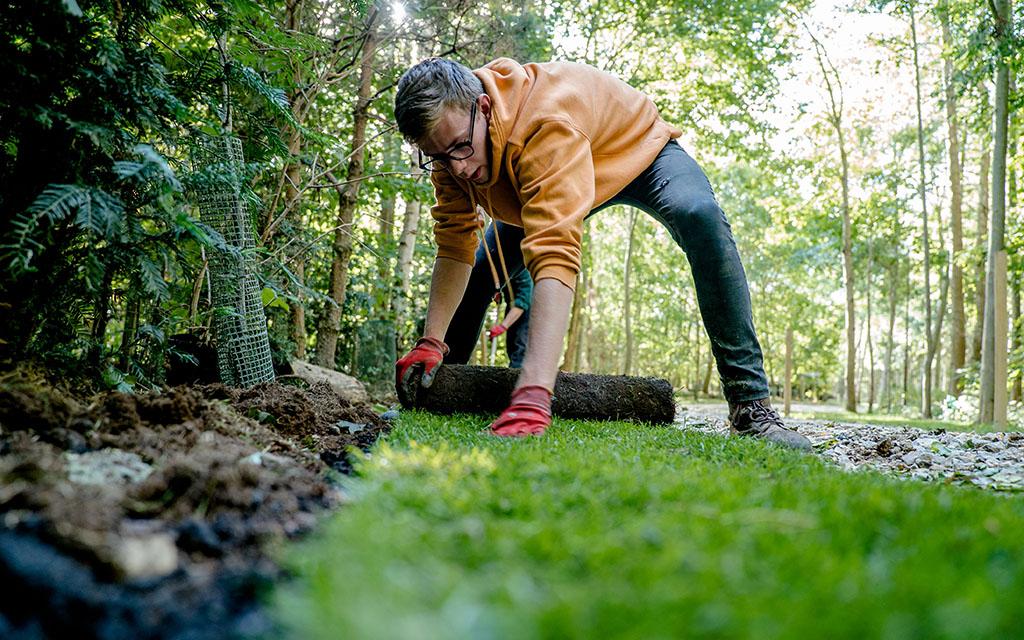 Instead of George travelling to college every week, YMCA Tutor, Andrew Harwood, regularly visits George on site. This way, George can carry on working without any interruption to his work or the business.

Most of George’s exercises and assessments are built into the day-to-day tasks of the business, making it easier for both the employer and the apprentice. George really values his time with Andrew:

“I certainly wouldn’t have been able to do this without my YMCA Tutor. Andrew coordinates all the practical work and coursework that I need to do. Every six weeks I’ll meet him for a day and we’ll review my course work. He helps me with anything I’m struggling with and then he allocates the next six weeks of work. If I have any questions, I speak to him. He makes it possible for me to achieve a certain standard. Andrew has really helped me.”

Looking to the future

Although he’s half way through his apprenticeship, George still has plenty to learn from Richard and the business.

When he achieves his ‘Horticultural Operative Level 2’, further options will be available to him including a potential job with Melville Brown Ltd, further courses in management or possibly a job with another employer.

Whatever George decides, he’ll have a qualification, training, experience and the confidence to make his way in a career he loves. George has set his sights on Horticulture Business Management:

“I want to climb the ladder as high as possible. I’d still like to be involved with landscaping, but I’d like to be in charge. I want to have something in my name that people know me for – that would be my dream. Hopefully I can get to that. This is the first step that I need to take – it’s the qualification that will enable me to do what I want to do.”

Inspired by George’s story? Could you benefit from an apprenticeship? We have apprenticeship opportunities all over the UK, from jobs in childcare to motor vehicle maintenance. What’s stopping you?