How our HIV Positive Health Programme is changing lives | Central YMCA Skip to main content
Feature
Health and Wellbeing
Set up in 1997, Central YMCA's exercise programme for people living with HIV is almost 25 years old and has helped over 15,000 people
13 July 2021

The Positive Health Programme, available to anyone living with HIV across London, was created to give participants the opportunity to engage in exercise to help them manage their physical and mental health long-term.

"Exercise is important for people living with HIV on many levels.  It helps to manage side effects from medication by promoting muscle mass, managing lipodystrophy, aiding better sleep and increasing appetite.  It can also help to manage other long term health conditions such as high blood pressure, high cholesterol and diabetes and can have a large impact on improving mental health, mood and outlook." Victoria Brown, Positive Health Co-ordinator

HIV can not only affect someone's health, but also their confidence and wellbeing. Positive Health is a 12-week programme which works on improving fitness, self-esteem and quality of life. When it comes to an end we offer subsidised access to our YMCA Club in London and continuous support so that exercise becomes a part of daily life.

The Programme provides participants with four supervised gym support sessions every week as well as opportunities to try exercise classes and swimming. Participants have exclusive access to a range of therapies including reflexology, holistic massage, Life Coaching, and energy healing. Our Nutritionist provides participants with nutritional advice and will look at ways in which individuals can optimise their nutritional intake in relation to their individual needs.

HIV is a condition that unfortunately still carries a lot of stigma and the Positive Health programme tries to combat the isolation often felt by those living with HIV by offering opportunities for social interaction. Social activities include a monthly tea and chat meeting, a talking support group with our Peer mentor and social events have included theatre trips, picnics, quiz nights, weekends away and bowling. The programme also offers a weekly arts class and other courses including drama, creative writing and mindfulness.

Virginia: "At the YMCA Club I never felt stigmatised."

Virginia is a long-term HIV survivor, having been diagnosed 24 years ago, and has been a member of Central YMCA Club for over 17 years.

“At the YMCA Club I never felt stigmatised, and I’m open with my condition. The Positive Health programme is pioneer and helps people living with HIV to overcome the fear of the stigma. The programme has helped me to revert some of the changes to my body-shape caused by the medication and meeting people from different backgrounds and histories enriches our lives. YMCA has also helped me to recover from breast cancer. I was very weak physically after all the treatment and I joined the older adults programme even though I was in my 40's and I managed to recover all my strength through tailored exercises.”

Positive Strokes is a swimming club which was born in the Positive Health programme in 2015 and is now run entirely by volunteers who are passionate about this cause.​ The coaches offer swimming lessons for all levels of swimmers.

In 2015, a group of swimmers from Positive Strokes were the very first HIV+ swimmers to compete at the Euro Games in Stockholm and the team continues to compete in Masters swimming competitions in the UK and across the world. The team has not only achieved significant sporting success, but has also proved to be a powerful force in fighting stigma that exists around HIV.

In 2017 Positive Strokes was awarded the Swim England David Sparkes OBE Award for Innovation in recognition of the fantastic work that the team have done to provide a welcoming and supportive environment, increasing participation and making a huge difference to people’s lives.

“To get this award is extraordinary, we are such a small team just trying to make things a little easier for people with HIV. To be recognised by Swim England really helps break down the stigma that still affects people living with HIV.

“Having the ruling body of swimming in England publicly say it's ok for HIV positive people to be swimming puts a really strong message out there that there is absolutely no way that anyone is at risk from being with or swimming with people infected with HIV. Unfortunately even today there are people who incorrectly think that HIV can be contracted via saliva or even by close contact.

Watch this video to hear from Marc about being a volunteer on Positive Strokes or read the full story. 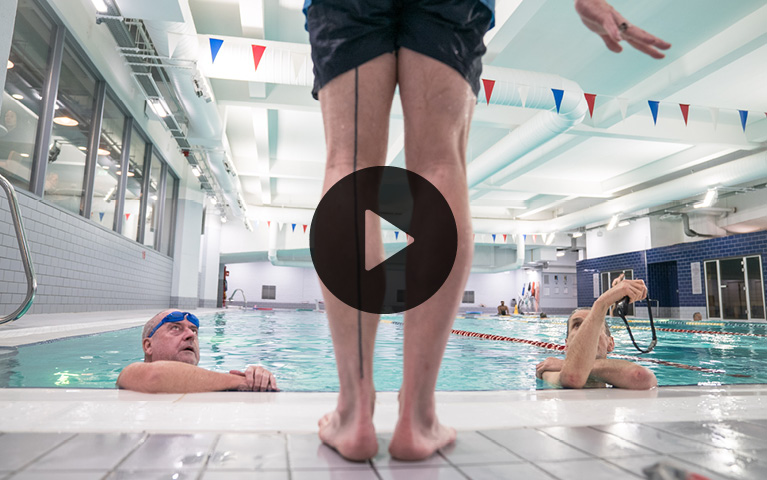 How to be referred onto the programme?

To be referred on to the programme you would need your GP, HIV consultant or clinic nurse to fill out our referral form, which gives us your medical history. Once the form has been received we will invite you in to the gym to show you the facilities, give you a fitness assessment and get you started on the 12 week programme.